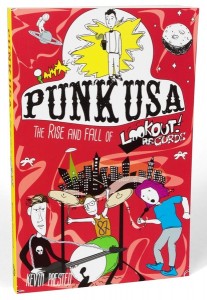 Punk USA – The Rise And Fall Of Lookout! Records – Kevin Prested (Microcosm Publishing)
Why do some punk / hardcore labels have a magical ring to them? It’s not that Revelation has better releases than Sideonedummy or Epitaph per se, but there is a circle of collectors which has become almost a sect. Lookout! Records also became a label to keep an eye on, and even the logo on the back of a release was enough to get it noticed and snapped up by the thousands. Unlike Revelation, something went horribly wrong with Lookout!, which made it eventually disappear off the radar. This book deals about the rise and fall of the label. The great punk rock label that gave us Operation Ivy, The Mr. T. Experience, Pansy Division, Groovy Ghoulies and a band that was very closely linked to the turmoil of Lookout! – Green Day. Interviews were conducted with many people involved in the label, which give an amazing insight in the do’s and don’ts of a punk label. It’s a great read even if you’re not too familiar with the Lookout! bands. I only wished the book would also include an extensive discography of the label, just to make it complete for all record-collectors. Martijn Welzen