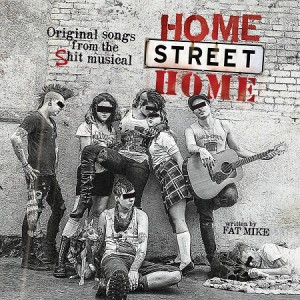 The studio album features performances by Fat Mike and NOFX, and sees the play’s characters inhabited by a wide roster of vocalists including Frank Turner, Alkaline Trio’s Matt Skiba, Tony Award winner Lena Hall (Hedwig and the Angry Inch), Bad Cop/Bad Cop’sStacey Dee, the late Tony Sly of No Use For A Name, and Dance Hall Crashers’ Karina Denike. Members of Descendents, Lagwagon,Old Man Markley, Mad Caddies, Me First and the Gimme Gimmes, The Aggrolites, The Living End, The Real McKenzies, and RKL also play on many of the tracks. The Home Street Homeconcept album includes a portion of the songs that will ultimately comprise the full score of the new musical.

Based on true stories of the authors’ experiences, the story of Home Street Home revolves around Sue, a 16-year old runaway who plunges headfirst into the deviant subculture and alternative lifestyle of the streets. After being adopted into a tribe of homeless teens, Sue finds empowerment and acceptance from her new chosen family.

Fat Mike said, “Ever since I saw Rocky Horror when I was 8, I’ve been intrigued by musicals. Well, not all musicals, just the ones that break the mold. Luckily, I found two people, Jeff Marx and Soma Snakeoil, that love breaking things as much as I do. This is fucking fun!”

ABOUT THE ARTISTS:
Michael John Burkett, better known as FAT MIKE, is a musician, songwriter, producer, record label executive and restaurateur. Best known as the lead vocalist, bassist and songwriter for long-running iconic punk rock band NOFX, Fat Mike is also bassist and arranger for supergroup cover band Me First and the Gimme Gimmes. NOFX formed in Los Angeles in 1983, signed to Epitaph Records in 1989 and went on to sell over six million records worldwide. In 1990, Fat Mike cofounded Fat Wreck Chords, a punk rock record label that has released over 300 albums from the likes of Rise Against, No Use for a Name, Lagwagon, Against Me! and many other bands. In 2004, he founded Punkvoter in an effort to mobilize the punk community to vote and in turn raised over a million dollars for the Kerry campaign. NOFX have released 14 proper full-length albums and dozens of 7″s, EP’s, and even their own reality series, Backstage Passport, which premiered on FUSE TV. He also enjoys golf, bike riding and taking his daughters to Vegas.

JEFF MARX co-created and co-wrote all the songs for the hit Broadway musical AVENUE Q, which won 3 Tony Awards in 2004 (Best Score, Best Book, and Best Musical). He co-wrote songs for the Emmy-nominated musical episode of SCRUBS, the theme song for the TV series RICK & STEVE, and some of the best songs in Broadway’s THE BOOK OF MORMON. His song “You Have More Friends Than You Know” (co-written with Mervyn Warren) was featured on GLEE last year. His journey with AVENUE Q and the Tony Awards is captured in the documentary film “Show Business: The Road to Broadway.”

For more information, go to www.fatwreck.com