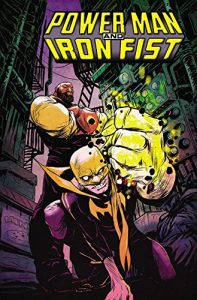 As a kid who read comics and grew up in the seventies and eighties, it was inevitable that at some point, I was going to collide headlong with Heroes for Hire. And when I did, as much as I wish I could say that it was love at first sight, that I instantly became a fan of the book and that it became one of my go to titles, but unfortunately, things didn’t quite work out like that. Even though my memory is a little fuzzy (one of those things that happens when you enter middle age), as I remember it I read a couple of issues, sort of liked what I read, but for some reason didn’t stick with it and went straight back to ROM, Batman and 2000AD. It took more than two decades for me to become a ‘fan’ and that only happened when Ed Brubaker began writing Iron Fist and Brian Michael Bendis made Luke Cage a pivotal player in Marvel’s premier superhero team during his run on Avengers.  So, more than three decades after they first crossed my comics radar, and having become a fan of each thanks to their spate endeavours over the years, it’s time for the “band” to get back together and for Danny and Cage to dust off their Heroes for Hire attire, get back in the ring and clean the crime and low life grime off the streets of New York again.

I don’t know what brand of coffee David Walker, Sanford Green and Flaviano were drinking when they wrote and illustrated this book, but whatever it is, I need to get some, because it’s driven Power Man and Iron Fist to heights of four colour glory that I never imagined -even in my wildest dreams -this book could reach.  The main arc finds the old partners and best pals banding together to help an old friend out after she gets out of prison, which, as you’ve probably already guessed, doesn’t end well. Having messed up spectacularly, and having become the target of most of New York’s gangsters, Danny and Luke are forced into reviving the Heroes for Hire brand in an attempt to fix the situation before it gets any worse, which it invariably does. Because the seventeenth rule of comic book storytelling states  ‘Things always get worse before they get better’ and that law is always implemented. The Boys Are Back In Town is a snappy, funny, razor sharp, fast as shark’s feeding frenzy story of street level heroes that focuses as much on the personalities and quirks of, and the dysfunctional dynamic that exists between, its central characters as it does the story that pulls them back together.  David Walker has a gift for dialogue and knows how real world people talk and communicate and transfers it effortlessly into the plot and by doing so, ensures that even the minor dramatis personae are fully formed, rounded and as believable as folks get in fictional tales set in world where people have super-powers. And because, on some level, he thought that his insanely good dialogue and story weren’t enough to keep his readers happy (they are), Walker also throws everything he can into the mix, love, betrayal, friendship and a whole load of rock ‘em, sock ‘em fist flying action. Which Sanford Greene, and then Flaviano (in the one shot that closes the book and signs, seals and delivers the contract that confirms that Heroes for Hire are back in business) bring to life with their jaw dropping, eye popping, infinitely detailed retro art that possess the full power of disco and funk but at the same time drags Power Man and Iron Fist straight into the twenty first century. Thank your maker and whatever planets aligned to make this happen, because The Boys Are Back In Town. And it’s about damn time… Tim Cundle