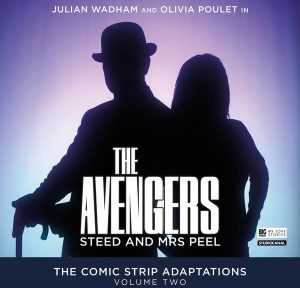 Much like Doctor Who, The Avengers is a very British institution, and while it took the latter a little longer than the former to enter the realm of outlandish and fantastical adventure, when it finally did so, it became the stuff of legend. Not that it wasn’t well liked before it altered course, but when it absorbed some of its more light hearted 1960s contemporaries’ gadgetry, strange villains and outlandish, weird and wonderful ideas, it moved in a more home-spun pulp direction. Forsaking its previous square jawed, pipe smoking, tweed jacket wearing heroes and slightly old fashioned sensibility, The Avengers became (at the time anyway) hip, happening and just a tiny bit tongue in cheek. It may have taken some time to firmly establish itself (during which Steed saw off a couple of partners), but when it did find it’s groove, well, the rest, as they say, is history and Steed and Mrs Peel became household names and the popular, and instantly recognisable, face of The Avengers.

As strange and bizarre as the odd couple’s adventures on television could be, when they were let loose in the four colour world, their escapades became even more, in a good way of course, eccentric and unusual. AndThe Comic Strip Adaptations Volume 2 captures and expands upon the tone, mood and spirit of Steed and Mrs Peel’s comic strip exploits perfectly and serves up a quartet of ripping yarns in which the debonair duo always, and inevitably, emerge triumphant. Whether facing a little criminal gang and their toy obsessed masters in Playtime is Over, rampaging animals dispatched to gain murderous revenge in The Antagoniser, the attempted assassination of visiting royalty by means most mysterious and millinery in The Mad Hatter or battling for their lives against a sinister cabal of moustache twirling and swivel eyed scoundrels in The Secret Six, Mrs Peel and John Steed maintain a stiff upper lip and keep the British end up while foiling all manner of foul play and  saving the day. Gloriously over-the top, wonderfully silly, jam packed with knowing , self-deprecating and reverential humour, these are the kind of stories that you lose yourself and all track of time in and keep returning to time after time.  The writing is spot on, Olivia Poulet and Julian Wadham are absolutely splendid as the main players and the supporting cast do a first class job of animating the dastardly foes and helpless allies that complete The Avengers world. In fact, it’s all rather magnificent and jolly good fun. Steed and Mrs Peel, you’re needed… Tim Cundle