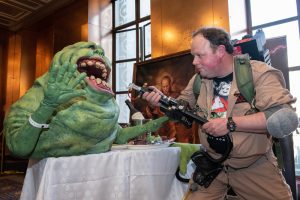 Following huge success in its inaugural year, Portsmouth Comic Con – International Festival of Comics will return to Portsmouth Guildhall on Saturday 4th and Sunday 5th May 2019 and tickets are on sale now!

In the largest event of its kind on the South Coast, Portsmouth Comic Con brings together the best in comic book, TV, film and pop culture entertainment, providing fun for aficionados, fans and families alike.

May’s event, attended by over 5,000 people, welcomed pre-eminent artists from around the world. Many of these have worked on the biggest properties in genre including Star Wars, Superman, Batman, Wolverine and many more including the incredible Walt and Louise Simonson, in their first visit to the UK in over a decade, Frank Quitely (All-Star Superman, X-Men, WE3), Rafael Albuquerque (American Vampire, Batman) and official Star Wars artist, Russell Walks. 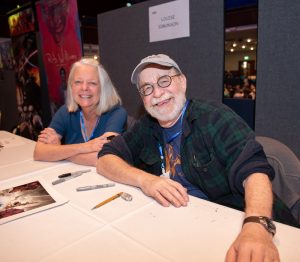 Celebrity guests from Film and Television including Game of Thrones, Doctor Who and Red Dwarf were in attendance. Additionally, fans were treated to virtual reality exhibits, panels, exhibitions, cosplay, special FX artists, retro gaming, board gaming and kids workshops. There was also a floor dedicated to Steampunk and a Comic City full of collectables which all added to the event. The weekend received many rave reviews from visitors and professionals alike:

“This was a wonder event. It surpassed my expectations on every level. Can’t wait for the next one! J” Facebook Review, 2018

“Portsmouth could easily rival some big London events in future years”
Down The Tubes.net Review 2018

Next year’s event, set over Star Wars weekend, promises to be even bigger and better with a special celebration of Batman’s 80th anniversary. With capacity limited, people are strongly advised to book early to avoid disappointment. 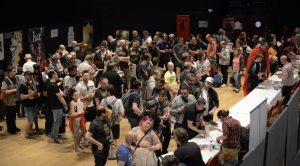 Delighted by the event’s reception, Chief Executive Officer for Portsmouth Guildhall, Andy Grays said “We can’t wait for Portsmouth Comic Con to return in 2019! We are working on some really exciting ideas and guest announcements with our partners, Tripwire Magazine, and we look forward to sharing these very soon. We are building on the elements of the event that people loved this year and working on a fantastic range of new exhibitions, displays and workshops to ensure there is something new for people to enjoy.”

Editor of Tripwire Magazine, Joel Meadows added “This year’s line up of comic artists will be hard to beat but we are working to do just that! There are some exciting names already in the mix and we will be attending a number of national and international Comic Cons in the coming months to ensure we bring the best to Portsmouth!”

For announcements, people are advised to follow @PortsmouthComicCon on Facebook or sign up online to receive e-newsletters. Tickets go on sale from 9am on Thursday 12th July at: www.portsmouthcomiccon.com or 0844 847 2362 with a Super Early Bird discount available