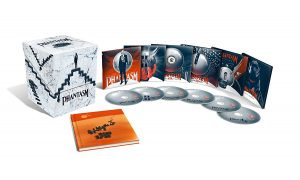 Any horror fan will tell you that the original 1979 Phantasm film is a classic of the genre. In an era of tired generic slasher films, it introduced wildly imaginative science fiction elements into a story about spooky goings-on at a rural mausoleum. The Tall Man and his cowled dwarf minions made for one of the more memorable antagonists in horror, but the real scene-stealer was the flying sphere and its array of sharp intrusive weaponry. Factor in some likeable, albeit amateurish, leads, atmospheric sets and visuals, not to mention a catchy theme, and it’s no wonder it was a massive hit that spawned several sequels.

Of course, as is the way with sequels of popular underground movies, the vision and spirit of the original tends to get diluted and lost, with shock tactics and studio demands usurping mystery and personality, and although the Phantasm series tends to buck this trend, with all the sequels being just as confusing and trippy as the first film, there is definitely a sense of diminishing quality.

Phantasm II ups the gore and has fun with Reggie’s character, who gradually develops into a reluctant Ash-like action hero, who never gets the girl but wields a pretty cool four-barrel shotgun and isn’t shy when it comes to blowing the Tall Man’s dwarfs into smithereens with it. It plays out like a demented road trip movie, with Mike and Reggie pursuing the Tall Man across backwater America through the deserted towns he has bled dry.

After that the films start to vanish up their own backsides a bit, although if you’ve been sucked in by the concept of other-worldly grave-robbing in the first two movies, there’s enough to keep you hooked, but if you sat down with one of the latter films without seeing the first, you’d definitely think it was a load of hokey – often repetitive – nonsense. Even the spheres, which were so thrilling when they first appeared in the early films, lose their excitement due to over-use. Reggie, Mike and the Tall Man all enjoy interesting development arcs, but new characters are thinly fleshed and often feel superfluous to requirements.

This is a beautiful collection though. The original film has been restored by J.J. Abrams, and it looks and sounds amazing. In fact, all of the films do. The conversion to Blu-Ray has definitely been kind to Phantasm, breathing new life into the visual and audio dynamics. And every disc is loaded with extras, mainly reminisces about the production and deleted scenes and trailers, but it’s all good stuff if you’re a completist. The sixth/bonus disc includes the Phantasmagoria documentary, which is a feature length look at all the films and their impact on popular culture, and various tributes to the late Angus Scrimm, who played the Tall Man. Everything is bundled up in a collector’s box with a replica (plastic) sphere and a 152-page book, full of poster art, stills and new writings from horror film buffs like Kim Newman. Admittedly this ain’t cheap, but it’s been assembled with love and attention to detail, and is definitely one for your Xmas list if you’re a fan of the weirdy indie horror genre. Ian Glasper