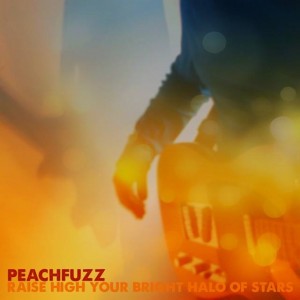 Peachfuzz – Raise High Your Bright Halo Of Stars CD (Bombed Out Records)
The Peachfuzz boys are back and they’ve brought one of the best album titles of the year with them. Following the template established with well-received 2012 offering ‘We Are Solid State’, ‘Raise High…’ delivers another blast of intense guitar-driven rock that wields its huge, crystal clear production to drag you in and carve a smile onto your jaded, heard-it-all face. I could cite the traditional Peachfuzz influences such as Big Star, Social Distortion or Teenage Fanclub, but by this point the band has made their sound their own – there’s nobody else out there doing anything quite like this with as much passionate intent. This is joyful, anthemic stuff which nevertheless deals with some pretty heavy themes. Opening tracks ‘Something’s Wrong’ and ‘Nobody Else’ set the pace for the rest of the album and inject a note of unease that is tempered with razored wit such as ‘We’re still pissing in the wind / But aiming high’. The punchy ‘Trouble Came’ continues this theme with its talk of ‘We hold our breath for other people’s news’, then the outlook starts to lighten with ‘Living With Defeat’ – an upbeat tune despite the title – before sliding into album standout ‘Hallelujah Here She Comes’, a hymn to cruel passions and doomed obsession. ‘Over Me’ picks up the pace again, crashing in with big riffs and booming drums that give way to ‘Next Year’ which will have you singing along by the time it hits the midway mark. With lines such as ‘Tonight I can really feel the sadness at the heart of everything’, eighth track ‘On Your Own’ arrives as a rallying cry for a faltering relationship but promises hope that bleeds over into the next song, ‘Highest Window’. The album concludes with the end-of-the-night closer ‘Giving Up’ as the band sign off with the refrain ‘Step outside and breathe in / Close your eyes and let it go’, by which point you want to press play all over again. If the song titles suggest an air of melancholy hidden behind the thrust of the music, the feel of the album is more one of making peace with your hopes and dreams. It’s okay to fall, it seems to say, as long as you’re falling forward. On the strength of ‘Raise High Your Bright Halo Of Stars’, Peachfuzz haven’t fallen yet.
Liam Ronan