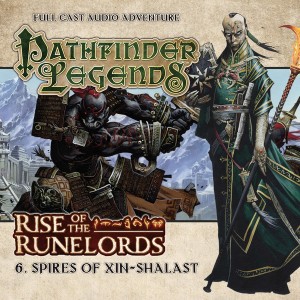 Pathfinder Legends: The Rise of the Runelords: Spires of Xin-Shalast – Performed by Ian Brooker, Trevor Little, Kerry Skinner, Stewart Alexander, Yuriri Naka, John Banks, David Dobson, Nicholas Rowe, Mark Donovan, Harry Myers & Steven Wickham & Written by Cavan Scott – CD / Download (Big Finish Productions)
All good things must come to an end, and ‘The Rise of the Runelords’, the first Pathfinder Legends series has reached the end of the…Well, path. For Valeros, Ezren, Harsk and Merisiel, the blood, sweat and tears that they’ve expended on their quest to prevent the evil of Karzoug once more infecting their homeland, bears bitter fruit as they finally confront the Runelord in his lair.

Having followed the trail of vanished Dwarven expedition, and stumbled across the horrors that befell it, the adventurers at long last enter Xin-Shalast; and after battling spectres, magic, giants, spiders come face to face with their quarry. But every victory demands sacrifice, and their determination to defeat their enemy cost them dearly, as each is forced to pay a price to fate in order to fulfil their destinies, and for some, with triumph in sight, the price may be too high. And as the dust settles, with Karzoug’s curses still reverberating in their very souls, they realise that although this quest may well be ended, their adventures have just begun.

While ‘The Rise of the Runelords’ may not have been to everyone’s taste, for this aging lifelong gamer it was a joy from beginning to end. Okay, so the characters may have conformed to stereotypical fantasy convention, and some of the themes are RPG staples, but you know what? That’s just made it more fun, for me anyway. Finally getting to hear a first rate cast embrace the medium, a medium brought to life by writers (Messer’s Scott and Wright, gentlemen, I salute you) whose passion, energy and love of subject shines through every word they’ve written, has been one of the highlights of the last twelve months, and my twelve year old self would have quite literally killed to hear a fantasy RPG reborn as drama. And my forty two year old self would have followed him into the melee, +2 battle axe swinging, as I’ve loved every second of it almost as much as he would have done. It’s been an honour. Encore, encore… Tim Mass Movement