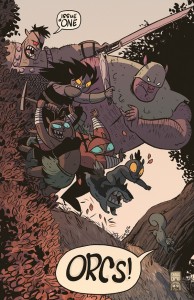 Are you the kind of person that “roots” for the bad guys and girls in films? Are you sick of the traditional fantasy archetypes of heavily muscled barbarians, mysterious elves and brooding rangers battling two dimensional monstrous villains in yet another quest to save all of creation from some oncoming darkness or other?  Then step right up folks, because ‘Orcs’ is the comic that you’ve been waiting for. Filled with the same sort of offbeat humour as Carl Critchlow’s Thrud , Aragones Groo, Goscinny and Uderzo’s Asterix and treading the same sort of artistic territory as Sfar and Trondheim’s Donjon, Christine Larsen’s Orcs! is easily one of the best creator owned books that it’s been my good fortune to stumble across in a while.

Flipping established convention on its head, it follows the exploits of a band of Orcs as they, sent by their king, venture forth on a quest to find treasure in a rather ominous wood. After being attacked by a rather unusual foe and avoiding contact with a pair of pompous, self-righteous (is there any other kind?) elves, they finally fulfil their mission; how successful it is though, is a matter of opinion and dependent on who’s perspective said success is viewed from. We’re also treated to a tale of Orcish legend and adventure, which plays with mythology and the old adage of invulnerability, and has a fantastically funny, almost throwaway punchline that’s the comic book equivalent of a nudge and a wink, as it riffs on Orc-ish stereotypes. Which for those of you not in the know, have a lot in common with East German Olympic jokes from the nineteen seventies. Oh, and the seer, the seer’s antics, which occur largely without the aid of dialogue, will strike a particular chord with fans of Asterix and Cheech & Chong. An incredibly promising start to what I think, and hope, is going to be one of the books to watch out for in the next couple of years. Yeah, this is definitely my kind of comic… Tim Mass Movement

What are you waiting for? You can get Orcs! here