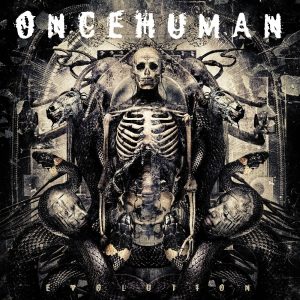 I first heard Once Human live on August 29, 2015 when they opened for Fear Factory at a local venue. The only things I knew about them were that they were a metal band and Logan Mader (MachineHead/Soulfly) was one of the band members. I had not, at that point, heard their debut album The Life I Remember so I wasn’t sure what to expect from them. I didn’t expect a tiny, attractive Australian woman to step out front and dominate the stage. I also didn’t expect the band as a whole to kick so much ass. All five members of the band went to the merch booth after their set and they all graciously spoke to fans, posed for pictures and proved completely that there is no room for a rock star ego in Once Human. Instantly I became a fan and listened slavishly to their album until I had emblazoned it upon my soul. Then the wait began…for the Evolution.

Falling in love with a new band is both a blessing and a curse. The music you love on their first release may not be matched by subsequent releases. The second album’s release is met with equal amounts of excitement and apprehension. Will it be as good as/better than/worse than the previous offering? In the case of Once Human, Evolution is just what the title suggests; an album that showcases the band’s growth and transformation into something bigger, better and more beautiful. Having added a third guitar player to the regular line-up has allowed for more complexity in the songs and each member has worked to make this album even better than the one that came before. This band will forever be on my list of favorites and I look forward to imprinting Evolution on my brain the way I did with The Life I Remember. These six musicians may once have been human but now they are Gods. Jim Dodge