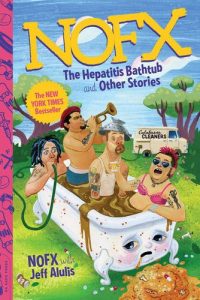 I make absolutely no secret of the fact that I’m a NOFX fan and that at least one of their albums has been in constant rotation in my playlist since 1992. They are forever associated in my mind with TJ’s and are responsible for some of the best punk rock shows that I’ve been lucky enough to see in the last thirty years. However, if you’d asked me to tell you twenty random facts about the band before I’d read The Hepatitis Bathtub, thanks to their well established and known policy of not talking to the press, I’d have probably struggled to get past fourteen. Now though, now I can tell you anything and everything that you ever wanted to know about the band and a whole lot more thanks to this brutally honest and open, warts and all history of the band and its members, told in their own words  by the people who know the story better than anyone. That’s right folks, Fat Mike, Hefe, Melvin, Smelly, Steve and Dave have spilled the beans and then some in this fascinating, jaw dropping, peek behind the curtain at one of the most (in)famous punk bands to have ever tuned up, turned it up and let loose on stages around the world.

As well as the story of NOFX’s formation, early days and well-travelled road to success, The Hepatitis Bathtub also explores the lives of the men behind the music in detail and how the band and their relationships with each other, their families and the people who have been part of their lives for the past twenty five years and some change have helped to shape their destinies and forge them into the individuals they’ve become. Some of them have had it a little more difficult than others, and Erik ‘Smelly’ Sandin’s tale, thanks to the self-destructive decisions he made, is particularly heart-breaking and tough to read at times, but his perseverance is remarkable and the fact that he’s still here to tell it is a testament to his will and the bond he shares with his band mates.  Others in the band have been on a life-long journey to discover who they really are, and it’s strangely life affirming when you discover, thanks to his incredibly candid forthright account of who he is and how he got there, that “Fat” Mike Burkett has finally arrived at a place where he’s happy and able to enjoy his every moment on Earth.  Then there’s Aaron “El Hefe” Abeyta and Eric Melvin, who also have incredible stories to tell of their lives in, and before, NOFX, both of which could be books in their own right.

And then there’s the band. No matter what you think you know, or what you’ve heard, the story of NOFX is ten times funnier, crazier, weirder and far more outrageous than you or I ever dared to imagine; and I’m willing to bet that while you’re reading this tome (which you should by the way, as it’s a real punk rock page turner) you’ll mutter “No fucking way!”, exclamation point and all, at least seventeen times under your breath and be forced to do roughly the same number of double takes and re-read what you just read to make sure you actually read what you thought you did and didn’t just imagine it. Yeah, it really is that insane. Jeff Alulis has an easy going prose style that presents each member’s take on things in a fast flowing, snappy manner that almost guarantees that once you’ve picked it up, you won’t be able to put it down until you’ve finished reading it and then all you’ll want (and by you, I of course mean me, but I figure that, like me, you’re all cool cats and share a similar mind set) to do is read it again. The Hepatitis Bathtub is the story of a band, and its members, who did, and continue to do, things their way and who took, and take, no shit from anyone. If you’ve ever spun a NOFX record and if there’s even a modicum of punk rock spirit in your soul, then you need to read this astonishing book. It’s that simple… Tim Cundle