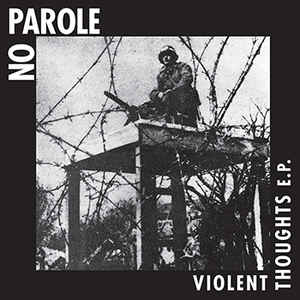 The cover of this EP is starkly reminiscent of some of the classic early UK oi! singles, and that really sets the tone for No Parole. After the likes of No Time have hit the stereo recently, I was kind of expecting some more of that raw early hardcore meets streetpuk stuff, but this is traditional oi!, picking up influences from both sides of the pond. No Parole serve up a rough unpolished sound, but scratch beneath the gruff vocals, you can hear some bass-driven melodies going on, reminding me at times of Blitz, The Business or Major Accident. The overdrive is turned on full which makes the whole thing sound like there is a powerful engine revving underneath it all. There is a definite East Coast of Oi! touch to this too, I can hear touches of Templars, Oxblood, The Krays and Infiltrators on the six songs on this EP. The occasional guitar lick brings a bit of variety to proceedings, and helps keep you listening throughout. A solid Oi! record, nothing more, nothing less. Tom Chapman