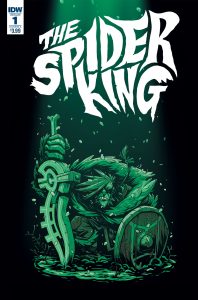 In the year 956 AD an unlikely group of Viking warriors in northern Europe face an even more unlikely adversary in the form of… Aliens! The debut graphic novel from Australian author Josh Vann and Italian illustrator Simone D’Armini, The Spider King, introduces a vicious and violent world of survival to an extra terrestrial threat unlike any mankind has faced before.

Originally self-published in 2016 and funded with Kickstarter, The Spider King will make its serialized debut this February as IDW will release the international hit to a whole new audience. Garnering early praise upon its release, The Spider King was nominated for Best Graphic Novel at the 2016 Aurealis Awards and went on to win Bronze which acknowledges excellence in Australian comic art and publishing.

“More than just a clash of genres, the Spider King is a classic Viking saga about loyalty, family, honour, and revenge,” said Vann. “At the root of this story is Hrolf, the reluctant king of the Laxdales, who is on a quest to avenge his father and kill his Uncle Aarek. But Hrolf’s plans are complicated when Aarek is possessed by a bloodthirsty alien parasite, hell-bent on destruction.”

“If you’re a fan of titles like HEAD LOPPER, HELLBOY, and the work of Becky Cloonan, THE SPIDER KING absolutely needs to be in your pull list,” says editor Sarah Gaydos. Way too much fun and awesome art in one book!”

Launching in February the four issue series will feature an impressive array of variant covers including Skottie Young, Afu Chan, and Jakub Rebelka. The Spider King is available for pre-order now through your local comic shop.