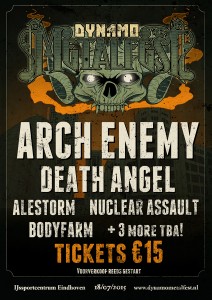 A new year, a new announcement… And time for a young band that will give Alestorm, Nuclear Assault, Death Angel and Arch Enemy a run for their money. Dutch band Bodyfarm is the fifth addition to the line up of Dynamo Metalfest.

“Of course a party like Dynamo Metalfest isn’t complete without some old school death metal,” says Paul van Berlo, organizer of Dynamo Metalfest. “And this is a relatively young band that is on the rise, which fits in well with our principles that we also give new talent a chance to shine“.

Bodyfarm was founded in 2009, and has already added many festival performances and tours to their achievements.. Sitting still is something they can’t do; since they formed, they’ve released two albums, with another one planned for this year. Without a doubt, heads will bang when they play these new songs, in the old school way.

In addition to the five bands already confirmed, a further three bands will be announced in the coming weeks.