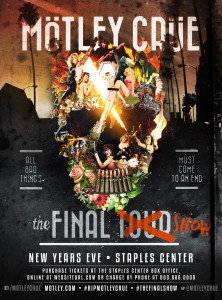 NEW SINGLE AND VIDEO CLIP “ALL BAD THINGS” OUT TODAY

Iconic rock band Mötley Crüe have announced details of their final performance. This will mark the end of their touring career and will conclude their two year Final Tour cycle at the end of 2015 on New Year’s Eve, December 31st. The show takes place at the Staples Center in their hometown of Los Angeles where the band’s career began 34 years ago.

Mötley Crüe first announced plans for their 2-year Final Tour by signing a Cessation Of Touring Agreement at a press conference in Los Angeles in January 2014, solidifying the end of their Final Tour at the end of 2015.

The 2014 leg of the Final Tour was one of last year’s top grossing tours, selling close to a million tickets across 72 cities and grossing more than $45 million. Rick Franks, Live Nation’s Regional President of North American Concerts said “New Year’s Eve 2015 will mark the end of an era in rock history but there’s no doubt that Mötley Crüe’s music will influence generations of artists for years to come.”

After thirty-four years performing together, the 2015 leg of the Final Tour will see the band play Japan in February, then Australia/New Zealand in spring. In June Mötley Crüe will say farewell to the European Festival circuit with 3 massive performances at Download (UK), Sweden Rock (Sweden) and Novarock (Austria) Festivals before taking their can’t-miss show back to the U.S., Canada, and Mexico this summer for 34 final North American shows due to tremendous fan demand.

Following the North American summer shows, the band will take the Final Tour on more international dates this Fall before “all bad things come to an end” for good on New Year’s Eve 2015.

The band have also released a new single “All Bad Things”. The track is accompanied by a video clip of highlights of Mötley Crüe’s 34-year career and premiered on The Tonight Show’s blog to preview the band’s national TV appearance on the show this Thursday 22nd January.

Mötley Crüe are also in the process of putting together the ultimate collector’s album package for the fans to be released later this year which will include the new track, “All Bad Things” amongst many other surprises, details of which will be announced in the near future.

Since 2015 is all about celebrating the legacy of Mötley Crüe, the band and fans from around the world will also be able to share their memories, pictures, thoughts and stories of 34 years of Mötley Crüe online at www.motley.com using #RipMotleyCrue.

All tour dates are on www.motley.com