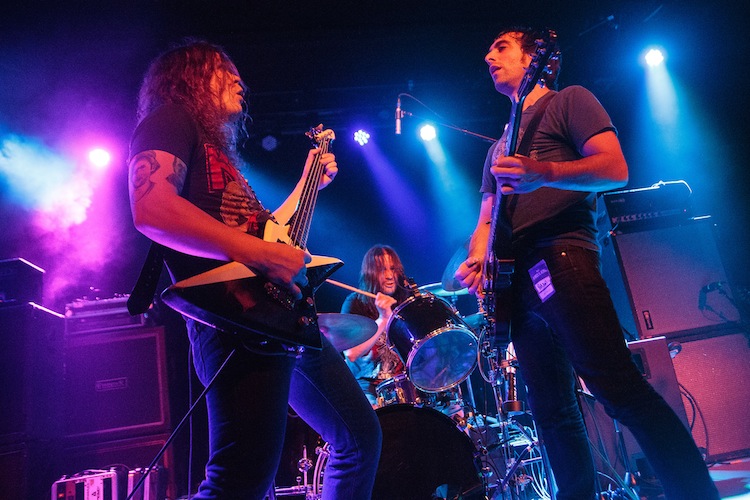 Listen to “Sweet Ivy”, the first single from Mutoid Man‘s forthcoming debut full-length, now on RollingStone.com. The track appears on Bleeder which will be available on CD, LP and digital formats from Sargent House on June 30th. Mutoid Man is an incredibly talented trio featuring Stephen Brodsky (Cave In) on guitar and vocals, Ben Koller (Converge, All Pigs Must Die) on drums and Nick Cageao on bass and this album is sure to turn heads of any fan of progressive rock music. This is no self-indulgent sonic experiment, no tepid throwaway-track recycling project, no musical 180° into cringe-worthy territory. Instead, Mutoid Man offers up the best of Brodsky and Koller’s respective worlds. Brodsky distills the melodicism and metallurgy of Cave In into a concentrated elixir of frantic fretboard work, big riffs, and undeniable vocal hooks. Koller continues to batter his drums with unmatched force and dexterity. With the recruitment of bassist Nick Cageao and his driving low-end growl, Mutoid Man quickly established themselves as one of the dominant new power trios in the world of heavy music.

While the band’s EP Helium Head (2013) wasn’t a severe sonic departure from its makers’ previous endeavors, it still offered up a kind of frenzied excitement and ecstatic energy that was new territory for its members. With their debut full-length, Bleeder, Mutoid Man proves that the euphoric fury of their EP was no fluke. Recorded by Kurt Ballou at God City Studios, Bleeder builds upon the triumphant barrage of Helium Head with bigger production, increased ferocity, and the bolstered confidence from writing as a three-piece unit. The band storms out of the gate with “Bridgeburner”, a galloping blitzkrieg of NWOBHM guitar leads, hardcore tempos, and a pummeling climax of bottom-heavy riffage. The album continues on like a gluttonous orgy of every metal indulgence the band has held since junior high school. It’s as if there was an amalgam of all these realms of heavy rock music that hadn’t yet been attempted, and Mutoid Man have nailed it with such precision that it comes across like a grand epiphany. “Reptilian Soul” and “Sweet Ivy” marry the warped guitar lines of the Hydra Head catalog to balls-to-the-wall rock choruses; “1000 Mile Stare” and “Soft Spot In My Skull” pair Robert Fripp-level prog shredding against a virulent strain of thrash metal; “Surveillance” and “Deadlock” showcase Koller’s lightning-fast blast beats against thunderous drop-tuned riffs; “Dead Dreams” beefs up sludge metal to cataclysmic proportions. By the time the band reaches the closing track “Bleeder”, they’ve blown through so many breeds of maleficence that they can effortlessly jump between power-metal balladry, apocalyptic doom, and Dio-era Sabbath.

Mutoid Man was initially meant to be an exercise in flexing the creative chops outside of the members’ other projects. But if Helium Head proved that this musical diversion was serious business, Bleeder confirms that Mutoid Man are an imposing force regardless of their pedigree. Written in concentrated flurries between their other musical duties, Bleeder exudes the short bursts of manic energy that typified their creative process. There is no time to sit and ponder the bigger picture, no reason to search for subtlety—once the album launches into the first riff of “Bridgeburner”, there is no surrender, no apologies, and no relenting until the final crash and chug of the closing title track. Clocking in at just under half-an-hour, Bleeder seizes upon the same concentrated ferocity of classics like Reign In Blood. And with songs as good as these, Bleeder is sure to become a classic in its own right.

More Mutoid Man song premieres off of Bleeder coming soon. In the meantime, pre-order the album from iTunes, see Mutoid Man on tour and keep up the band via MutoidMan.com.