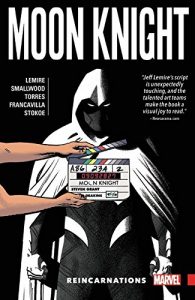 While the world as a whole shied away from discussing the stigma of mental illness during the seventies and eighties, Marvel charged at it headlong with the creation of Moon Knight, a bruising vigilante and the avatar of justice for the Egyptian god of the Moon, Khonshu who had more in common with Miller’s Dark Knight than Captain America and also suffered from, amongst other things, multiple personality disorder.  In the four and some spare change decades since he made his debut, Marc Spector (aka Moon Knight) has been a constant, if not always in print, character and while he’s never been regarded as an A-lister or made the superhero premier league, his fan-base is loyal to the point of obsession and has ensured that, instead of fading away, he continually returns to the fold. But it’s here, in Jeff Lemire’s hands that he’s become something more than just a superhero plagued by delusion and mental illness, he’s become a hero for battling his inner demons rather than the forces of darkness, in all of their facets, that plague the world at large.

Reincarnations is the story of Marc Spector becoming whole again, as the endeavours (whether that’s filming the latest Marvel blockbuster, battling werewolves on the moon or keeping the streets of New York safe as a taxi driving guardian of the night) of the individual personalities that his fractured psyche has created are all drawn together for a final showdown with their host mind. Rather than following a traditional linear narrative, Reincarnations jumps from personality to personality, giving the reader an incredibly honest and brutally raw insight into the torture and confusion that holds Spector within its grasp, and using different artists to tell each personality’s tale allows them to become fully formed entities in their own right, which in turn makes the climactic confrontation all the more heart breaking. Lemire, probably more so than any other writer who has helped craft the destiny of Marc Spector, has absolutely connected with everything that Moon Knight is on every single level and while it isn’t always the easiest of books to read, and I don’t think Lemire intended it to be, it is, none the less, an essential one that should be topping individual pull lists all over the globe. Brave, forthright and not afraid to whip up a little controversy or confront it head on, Moon Knight challenges traditional ideas of mental illness and follows its own unique, enjoyable and sometimes slightly challenging path and thanks to the artists who give Spector form, shape and substance, it looks fantastic too. Absolutely essential… Tim Cundle