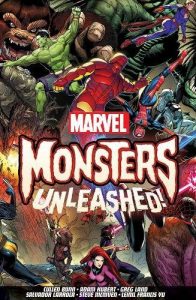 There was a time in genre, and populist culture, when giant monsters and kaiju ruled the world and pretty much destroyed it every other week. The fifties and sixties were a glorious period in pulp science fiction and b-movie cinematic history; and while Godzilla and his ilk have continued to rampage through the lands and oceans where the sun rises to this day, in the less enlightened realms of gaijin entertainment, colossal beasts wreaking devastation upon humanity have for the most part, become a thing of past. Or they had until Cullen Bunn decided to rain a plague of them upon the Marvel Universe in Monsters Unleashed! in which huge creatures from the blackest depths of space begin to fall on every centre of civilisation throughout the planet.  And as they begin their rampage, Earth’s first and last line of defence, the superhero community, is gradually beaten back, until, on the verge of certain defeat, help arrives from a very unexpected but most welcome quarter.  When everything is at its bleakest and the survival of Earth hangs in the balance, Terra’s native monsters return,  encouraged and invited by a very special child who is able to somehow* communicate with and summon all manner of creatures of legend and mythology. So the superheroes take a back seat while all manner of monsters pound the holy heck out of each other and the underlying, lightning quick, endearing, beautifully imagined and much more intelligent than the title might lead you to believe plot involving prophecy, invasion and a multi-clawed, too many teeth to count, tentacled, many eyed sentient extinction level event unfolds in all of it’s magnificent glory.  In short, it’s all kinds of four colour monsterific fun.

If I was a gambling man, I’d put money on the fact that Monsters Unleashed! is Cullen Bunn’s love letter, and ode, to the world of Tokusatsu. A glorious mish mash of science fiction, galactic horror and planet shaking violence and brutality, Monsters Unleashed!  looks ten times better than I hoped it would with classic giant monsters of the big screen atomic age, gibbering Lovecraftian nightmares, things from unconscious race memory and beasts from beyond the stars being brought to tantalising terrific technicolour life by the who’s who of Marvel’s premier, go to, artistic talent that assembled and unified to make Monsters happen. Then there’s the surprise wallop in Monsters Unleashed!’s barbed tail full of radioactive stingers, the slightly tragic, yet incredibly affirming story that lies at its heart and forms its core. The tale of Kid Kaiju and his newest, bestest friend and the one person who has more faith in him than anyone else, Moon Girl. And she, to add a little something extra to the action packed spectacular that she’s become entangled in, just so happens to have dragged her other best friend, Devil Dinosaur, into the fray, who without too much undue cajoling gets tooth and claw scrappy with all of the outer space nastiness.  So sit back, buckle up, hold on tight and enjoy the ride. Here be monsters…Tim Cundle

*As River Song was, and is, so fond of saying “Ssssshhh, spoilers”.