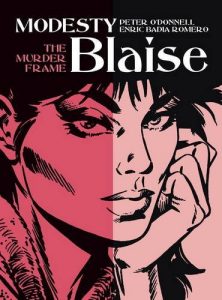 For those of you who have never read a Modesty Blaise novel I urge you to get out there and do so now; to my mind, they are what the James Bond novels would have been had Fleming written them in the style of the Connery films at the height of sixties spy goodness: vibrant and colourful and bursting with wit. They were not, of course, Modesty’s only incarnation – by far her lesser one in terms of sheer number of adventures (with some crossovers to the books, and vice versa), as manifested in the daily comic strip featured in the pages of the Evening Standard from 1963 until nine years before writer Peter O’Donnell’s death in Brighton in 2010. The Murder Frame is Titan’s twenty-eighth – yes, twenty-eighth – volume of these adventures, collecting the title story along with Fraser’s Story, Tribute Of The Pharoahs and Special Orders, with artwork in all cases by Enric Badia Romero. They date from 1997/8 – the stories themselves about to number in the nineties, and in any other series arguably long past their prime – and yet these are as inventive and rich as ever.

O’Donnell never seemed to tire of Modesty, or if he did never let it show. His request that no new adventures be written after he was gone is, I think, a mark of the regard in which he held her. So here, within this latest collection, we have an as-ever-wonderful gathering of classic murder mystery, internecine strife, desert shenanigans and human slavery, each panel of each story stunningly reproduced in a quality far beyond its original black-and-white newsprint and with a passionate introduction to each by crime writer Rebecca Chance. There’s no need to have read Modesty’s earlier adventures in any form to enjoy what’s on offer here, though for back-story it would certainly enrich the experience, so hell, alongside buying this why not buy some others and do yourself a favour? One of the best characters and best thriller/espionage series ever created, my fervent wish is that O’Donnell hadn’t made that particular request for no more adventures upon his death, because I would have loved to play in this sandbox, in doing so probably hoping without hope to be anywhere near as masterful as he. Mike Wild