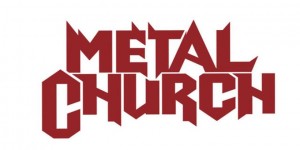 Hard rock titans Metal Church are very pleased to announce their long-awaited return to the UK this May as part of a larger European tour, celebrating the upcoming release of brand new studio album ‘XI’.

They will be playing legendary London venue the Camden Underworld on 10th May, with support coming from Antwerp metallers Bliksem and Dutch thrashers Distillator.

“It’s great to be playing in the country where everything that I aspired to be as a kid came from. Look forward to seeing all of our Metal Church friends at the show!”

You can purchase tickets to see Metal Church here:
10th May – The Underworld, London 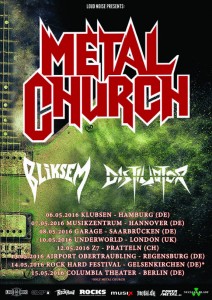 ‘XI’ was produced by Kurdt Vanderhoof and co-produced by Chris ‘The Wizard’ Collier.

From the first guitar riff of album opener ‘Reset’ through the driving outro of album closer ‘Suffer Fools’, it is clear that Metal Church is back and better than ever. ‘Needle and Suture’ and ‘Soul Eating Machine’ showcase the song writing that made the early Mike Howe albums ‘The Human Factor’, ‘Blessing In Disguise’ and ‘Hanging In The Balance’ such fan favourites. Musical opuses ‘Signal Path’ and ‘Sky Falls In’ clock in at over 7-minutes each and put the musicianship that Metal Church was known for on full display in 2016.

Metal Church recently released an official music video for their debut single from ‘XI’, ‘No Tomorrow’ which can be watched HERE.
The video was filmed in the Satsop Nuclear Facility, an abandoned nuclear power plant in Elma, Washington. The video was directed by Jamie Chamberlin of Black Dahlia Films and features a unique visual that ties in to the location. A behind-the-scenes video on the making of the video for‘No Tomorrow’ was also recently released and can be seen HERE.

The reunion between Mike Howe and Metal Church started in July of 2014 when Mike started working with Kurdt Vanderhoof on a side project he was forming with Nigel Glockler fromSaxon. Through these initial conversations, Kurdt convinced Mike to ultimately return to Metal Church. The idea was to see if they could recapture some of the magic from the three albums they released in the late 80’s: ‘The Human Factor’, ‘Blessing In Disguise’ and ‘Hanging In The Balance’. Out of those sessions, ‘XI’ was born and captures the sound that made the band fan favourites in the 80‘s and mixes it with a new, invigorated sound for 2016.