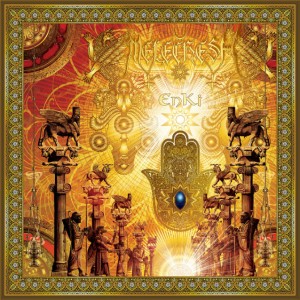 Melechesh – Enki CD (Nuclear Blast)
‘Sumerian Thrashing Black Metal’ is a phrase coined to sum up this Jerusalem born monster, and suitably descriptive it is to. Brutally harsh vocal rasps spat with vehemence, and cutting guitar riffs that leave an insanely distinctive prowess within their aggressive technicality. ‘Enki’ is the pinnacle of black metal euphemisms and thrash metal poignancy embracing homeland sounds of Middle Eastern music – never before has an extreme band created such a fantastically addictive cocktail of sound. Driving speeds and hammering rhythms instantaneously present during album opener ‘Tempest Temper Enlil Enraged’ are the solid base from which Ashmedi and his purpose picked sidekicks spawn their nine tunes of discontent. With guest appearances from Max Cavalera during ‘Lost Tribes’ also Sakis Tolis (Rotting Christ) and Rob Caggiano (Volbeat, ex-Anthrax) you can kinda some up the vibe here. Viciously belligerent without being an undecipherable wall of noise; ‘Enki’ is something special. Mark Freebase