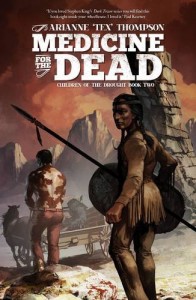 Medicine for the Dead (Children of the Drought Book Two) – Arianne ‘Tex’ Thompson (Solaris)
This is the second novel in the Children of the Drought’ series, the first, ‘One Night in Sixes’ is easily my favourite debut novel by any author this year so far. As you can well imagine I was a little apprehensive as the prospect of the dreaded second novel can sometimes take a tale into ill-conceived territory. Thompson however, is a fantastic writer who has clearly both created and developed a fully realised framework for her tales before setting pen to paper. The result is that this imaginary world in which the living, dead, humans, animals and all kind of things in-between co-exist has real depth and substance.

Thompson’s real talent though is for questioning morality within the confines of the story. The first novel centred on race and religion, whilst the morality of ‘do the right thing’ features heavily in this, adding to the discussion established in the first around religion and belief. Imagery is as well-crafted as are the characters, which work together deliver the plot, which is constantly progressed and developed while switching very smoothly from character to character following their separate paths.
Although the number of protagonist characters has been slimmed down in this volume in contrast to its predecessor, a lot more attention in given over to their development and their role in driving what is building to be a much bigger plot unfolding perfectly, paving the way for a much anticipated end of this trilogy which I pray will not take too long to arrive. Gav.