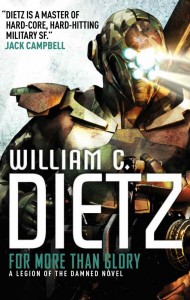 For More than Glory (A Legion of the Damned Novel) – William C. Dietz (Titan Books)
When a book series runs past a trilogy there is always a risk of it all becoming a bit stale; the author can tend to love the characters a bit too much or become a little too self-indulgent about the world they have created. Luckily Dietz does not fall into this all too familiar trapping.

In the fifth instalment of the Legion of the damned series Dietz continues to evolve the story line and expand the time line with ease. As with previous books, perspective on military politics and humanity is prominent and Dietz’s attention to detail is second to none.

This time around Lieutenant Santana is the driving force of the story, finding himself moved to a far off planet, far enough out of the way that he can’t get in the way of the corrupt powers that be. That’s when he ends up right in the middle of a big 1900’s China-esque style revolution. Dietz manages to change direction and make what could well be the best military sci-fi series I’ve read just as interesting in the fifth novel as it was in the first. Gav.