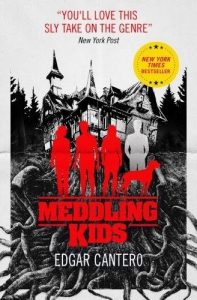 The title alone is enough to sell this book to legions of multi-generational Scooby Doo fans the world over. It’s become part of mainstream canon, an everyday part of life that almost everyone who grew up watching television from the early seventies on is familiar with.  Instantly conjuring up images of intrepid young investigators, haunted houses and masked criminals posing as monsters, Edgar Cantero’s choice of title wasn’t accidental. Meddling Kids revolves around, and uses that, image as a launching point for its central premise and builds its incredibly enjoyable and multi-tentacled plot around the populist idea of young detectives and their faithful mutt solving all manner of crimes that have stumped and befuddled their adult counterparts. But as good as the juvenile investigators were, the one case that made them famous is the same one that has haunted them their entire lives and left them feeling that there was something that they missed, something that wasn’t quite right about the way it ended. And thirteen years later, they return to the scene of the crime to find out what it is that’s plagued them and what really happened in that abandoned, derelict old house and why things continue to go bump in the night so long after the original case was supposedly closed.

Fusing Lovecraftian horror with the aforementioned Hanna Barbera favourite and perennial, popular childrens authors Enid Blyton, Franklin W. Dixon* and Robert Arthur Junior, Meddling Kids is a wonderfully constructed and fantastically plotted pastiche of the genre’s that it celebrates. Cantero runs with the idea that no one stays young forever and imbues his characters with all manner of real world adult problems, which makes them instantly relatable and endears them to the reader almost straight away, because after all, we’re all flawed and it’s gratifying to know that even the most seemingly squeaky clean heroes are just like the rest of us. The plot follows the rules of mystery devised by Blyton and company and the established rules of horror created by Lovecraft and his contemporaries almost to the letter and but at the same time lovingly plays around with both in order to create something fresh, while incorporating a sense of the small town dysfunction popularised by Stephen King and liberally sprinkling the contents of the story with all manner of clever geek culture references and in jokes. Funny, razor sharp and intriguing, Meddling Kids is the sort of book that no matter how hard you try or how much you think you want to, you won’t be able to put down until you’ve finished reading the last sentence on the last page.  Oh, and that old adage about judging books by their covers? It doesn’t apply to Meddling Kids, because it’s every bit as good, if not better, than the cover leads you to believe it is. Absolutely, totally, one hundred and ten percent recommended. And then some… Tim Cundle

*Yup, I know that Dixon was a publishing house pen name used by a number of authors to write the Hardy Boys books. But at the end of the day, that’s the name on the cover, so that’s all that matters, right?