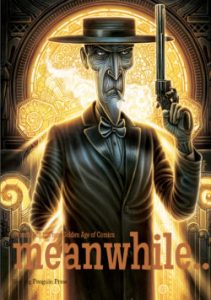 Let’s begin with something that I like to call truth time. The reason I started reading Meanwhile is entirely due to, and because of, Gary Spencer Millidge.  His weird, wonderful and all together strange story of rural village life in which nothing is ever is ever what it seems to be, Strangehaven  is one of the four colour highlights of the last two decades and a masterclass in slow burning tension and unexpected reveals.  When he announced that he was moving it from a self-published platform and was instead going to make his ongoing series one of the mainstays of Meanwhile, well, that sold it to me. I knew I had to read Meanwhile.  But then something odd happened. I found myself gradually being sucked into the world that the comic periodical presented, as issue after issue it served up a variety of outlandish, hard-hitting tales that resonated long after I’d finished reading them.  Meanwhile became a highlight of the comics calendar as it delivered, and continues to deliver, it’s mescaline flavoured, alternate reality takes on everyday life and the downright bizarre and the extraordinary directions that both can, and do, take the imaginations of their creators, and audience, in.

This issue follows it’s grand design to the letter, delivering another oddly disquieting and hugely enjoyable chapter of Strangehaven and a cornucopia of other four colour delights, headlined by the other serial that’s become part and parcel of Meanwhile, the decidedly chilling and disturbing Lovecraftian fable of vengeance, madness and things that go bump in the night, The Bad Bad Place. And while Gail Key’s Psychic Lost Item Helpline continues to weave it’s slightly off key and captivating magic, The Fist, the story of the crusading one percenter punishing the ninety nine percent who dare to step out of line or challenge the status quo  and The Needleman, which chronicles law enforcement in  a colourless, numbered future that has rejected individualism and free will are hugely impressive, it’s the gut punch, heart breaking, ode to loss Sugar: Tim that’ll linger long in your memory.  Maintaining the tradition of unsettling story telling embodied by Rod Serling, Alfred Hitchcock and Tales of the Unexpected, Meanwhile is one of the best kept “secrets” in comics and continues to amaze, astonish and reward it’s readership in equal measure.  And it is, as ever, absurdly good…  Tim Cundle