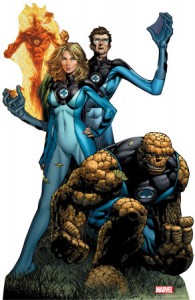 Marvel Platinum: The Definitive Fantastic Four – Stan Lee, Jack Kirby, John Byrne, George Perez, Len Wein, Walt Simonson, Art Adams, Mark Waid & Mike Wieringo (Marvel / Panini)
Most think of The Avengers as being Marvel’s premier super-hero team; and while that’s true in terms of mainstream exposure and arguably, popularity, the House of Ideas first team of super-powered heroes was actually the Fantastic Four. Truth be told, the cosmic ray powered defenders of all that is right and good were the first (barring Captain America of course) of Marvel’s big hitters to make their debut in the four colour universe, pre-dating everyone from The Hulk to The X-Men, Spider-Man, Iron-Man, The Avengers and everyone in between. Reed Richards, Ben Grimm and Johnny and Sue Storm arrived first, and whether or not their creation was (as urban comic book legend would have us believe) Marvel’s answer to DC’s wildly popular Justice League of America who began appearing on newsstands in the year previously, was, and is, immaterial. All that matters is that they hit the ground running and for the last five or so decades, have remained a mainstay of the Marvel Universe.

With the imminent arrival of the new FF film, Marvel and Panni have released ‘The Definitive Fantastic Four’ both as a crash course in the team’s history for the those who may not be familiar with the inhabitants of the Baxter Building, and as a way for those of us who have embraced their quirks and have rode the rollercoaster of their incredible adventures more than a few times to relive some of Reed and Co.’s more fantastic (I know, I know, but c’mon, I couldn’t resist it) moments. From their gung-ho ‘gotta beat the Commies into space’ all-American, slightly jingoistic (and anachronistic), flag waving origin story that ultimately results in them coming face-to-face with their oldest adversary the Mole-Man, through to some of their more infamous encounters with their nemesis (Doctor) Victor Von Doom (whose own origin tale also lies in these pages), it’s a non-stop adrenaline fuelled, action packed, foot to the floor compendium that’ll overload your cerebellum, leave you reeling and begging for more. Whether they’re fighting a town full of sorcerer’s in an attempt to rescue Reed and Sue’s son Franklin, trying to escape a bizarre, inspired hi-tech world (whose plot has been sprinkled with a slight flavouring of Gulliver’s Travels) created by Doom or trying to best their arch-adversary in his chosen field of the black arts and dark magic, ‘The Definitive Fantastic Four’ delivers enough excitement in one tome to keep you wired, awake and buzzing for the next fortnight.

Admittedly, I’m not the world’s most ardent FF fan (that said, I did rabidly devour both the Ultimate FF and Jonathan Hickman’s mind-bending run on the book), I couldn’t put ‘The Definitive…’ down and consumed it in one sitting and then re-read it just to make sure it was good as I’d originally thought it was. And it was. Okay, as with any ‘greatest hits’ book, especially one compiled from more than fifty years of history, the quality of the artwork, writing, plotting, dialogue and characterisation varies wildly from tale to tale, but ever page and every panel looks great and every story leaps off the page at you. So, I ask you this. What more could you possibly want? That said, what are you waiting for? It’s clobberin’ time… Tim Mass Movement