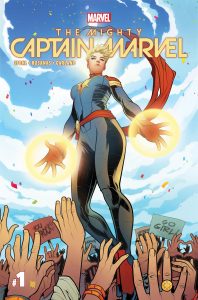 Marvel Comics is proud to present an unprecedented approach in introducing the world to Marvel Comics and the next great breakout Marvel Super Hero – Captain Marvel! Masterfully mixing animated comics with in-depth narration and commentary, this fresh new video series is designed to present a whole new audience to the world of Carol Danvers, a.k.a., Captain Marvel, timed with the debut of her brand new comic book series THE MIGHTY CAPTAIN MARVEL.

“Everyone wishes they had superpowers,” said lead singer of The Pretty Reckless, Taylor Momsen. “I always wanted to be Captain Marvel (Carol Danvers). I even tried to look like her when I was a kid. Unfortunately, I don’t have Kree genetics so, the best alternative to being the most powerful female superhero, was to be a rock star. Now that our song is being combined with Captain Marvel, I’m as close as I can be in the real world.”

“Over the past couple of years, Captain Marvel has become the voice and champion for a whole new generation of Marvel fans,” said Director of Content Development, Sana Amanat.  “Utilizing the power of Marvel’s Spotlight Music series, and headlined with The Pretty Reckless, we are so excited to introduce Carol Danvers to a brand new audience as the most powerful Marvel Super Hero of 2017 – the mighty Captain Marvel.”