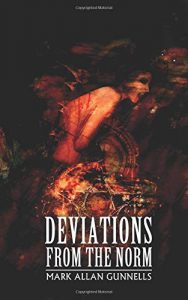 I love the novella format. I think it is almost the perfect length for many tales. Long enough to really develop the stories and characters, not so long that it wears out its welcome and starts to feel padded. As a reader, I’ve always particularly enjoyed when King has put out novella collections and was thrilled when his son Joe Hill followed suit recently.

And I’m thrilled to be offering my own novella collection, DEVIATIONS FROM THE NORM. Thematically, I took three familiar horror tropes (the vampire, the time machine, the deal with the devil) and gave them my own twists, hopefully making them fresh and unexpected.

In this blog, I want to talk specifically about one of the novellas and how it came to be. And that is my time machine novella, “Kronoz.”

This particular novella was actually written backwards. Okay, not literally, but the idea developed backwards. The first thing I came up with was the ending. I’m not even sure where it came from, I can pinpoint no particular antecedent or inspiration for the idea. Just sprang to life in my head. Once I had that ending in mind, I worked backwards, figuring out how the characters would have gotten to that one moment.

I was very excited about the idea, but also more than a little worried. Within the fictional framework of a story, a writer still has to play fair. If he or she sets rules then those rules must be followed consistently. That is especially true in a time travel story when there is always the worry of paradox and contradiction. Yet that was also thrilling, the challenge of crafting this story and making sure I always played fair.

And as the story developed, in some respects it ceased to be about working toward that ending but more about exploring the characters. Finding out who they were and what kinds of lives they led. I felt I created some interesting characters, and I certainly grew to care about them quite a bit. Which heightened all other aspects of the story for me.

Once the story was done, I looked on it with pride but also wasn’t sure what to do with it. Too long to be a short story, and on the shortish side to be a novella. Then a friend of mine who ran a magazine asked if he could run it as a serialized story. I happily said yes, but then the magazine unfortunately folded before any of the story was released.

However, I had been planning this collection, DEVIATIONS FROM THE NORM, intending originally to have a vampire story, a deal with the devil story, and a ghost story. However, the ghost story grew into a novel in its own right, so I realized I could put “Kronoz” into the collection and it would work perfectly.

I am very happy to have this and the other two novellas available for readers, and I hope that those who give the collection a try enjoy the tales.

Mark Allan Gunnells loves to tell stories. He has since he was a kid, penning one-page tales that were Twilight Zone knockoffs. He likes to think he has gotten a little better since then. He loves reader feedback, and above all he loves telling stories. He lives in Greer, SC, with his husband Craig A. Metcalf.

Order Deviations From the Norm here