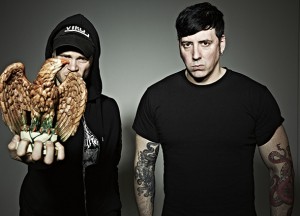 Northern Germany’s two-piece monster, MANTAR, have announced the official US release of their debut album Death By Burning via Brutal Panda Records. A ferocious and infectious approach to heavy music, Death By Burning was named one of 2014’s top albums by Metal Hammer Germany, LA Weekly (US), Exclaim (CA), MetalSucks (US), Terrorizer (UK) and many more publications, zines and websites. The album will see it’s official US release on LP via Brutal Panda on May 19th with pre-orders available via this location. All LPs will include a full download of Death By Burning along with an exclusive 8 track live set from the band’s German St. Pauli Sessions. Footage from those sessions can be viewed here and here.
The half-German/half-Turkish duo, consisting of vocalist/guitarist Hanno Klaenhardt and drummer Erinc Sakarya, are currently on their first US tour with American black metallers Mutilation Rites. A complete listing of dates is available below including their appearances at SXSW and Maryland Deathfest.

Recorded in 2013 and titled Death By Burning, the album was originally released to immense critical acclaim in Europe in 2014 by Svart Records, and is a raw, self-produced, and 100% DIY display of power. Managing to sound even heavier than most five-piece bands, in spite of the fact that no bass guitar was used on the record, Death by Burning channels early Melvins, Motorhead, and Darkthrone, to deliver a deliciously evil blend of blackened punk. A music video for the song “March of the Crows” can be viewed here.
Stay tuned for more info on MANTAR, including additional US tour dates.