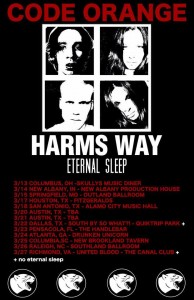 Deathwish Inc. label mates Code Orange and Harm’s Way have kicked off their U.S. tour dates in Columbus, OH. Their shows together will take the bands down to Austin, TX for SXSW next week and will ultimately end with highly-coveted sets at this year’s United Blood Festival in Richmond, VA. Check out the full tour routing below, including shows for each band individually in April and beyond.

Code Orange are on tour in support of last year’s critically acclaimed I Am King and were heralded as ”… riveting… at times overwhelming in the best possible way” by Alternative Press. The band closed out 2014 on a UK run with At The Gates and this tour marks their first of 2015.