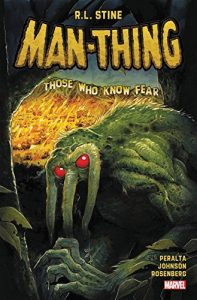 There’s something eerie, creepy, odd and just a little bit off about swamps. Something that sends a slow, shivering tingle through the collective psyche creating a feeling of unease and mild fear, one that lurks in the background noise of the everyday babble whenever we venture anywhere near, or come into contact in any way with, swampland.  And as for the denizens who choose to make those places their homes, well, the majority of us would simply have to hum a certain well known tune while plucking an air banjo to make our, admittedly wildly prejudiced and ill-educated, opinions about them known to each other. So, it’s not exactly a surprise that a swamp-bred, super-soldier created by fate and forged by accident, isn’t exactly popular among the regular folks of the Marvel Universe, which is why, when having regained the power of speech and his ability to think, Ted Sallis’s (that’s the Man-Thing to you) attempt to use his unique gift and appearance in order to break into television is met with a resounding thumbs down. Then, almost as soon as Ted’s bumped from the studio, he’s plunged into a swamp based crisis that threatens to end the world as we know it involving the Oldfather, the Nexus of Realities, giant alligators, monstrous pythons, a long lost love and a mad Queen.  Crazy as that may seem, is all in a day’s work for a man shaped, rotting heap of vegetation who more than anything, just wants to human again.  But a Man-Thing’s job is never done, and so Ted, as he always does, does what a good monster does, and sets out to save everyone and everything from being turned inside and upside down by the unpredictable power of the Nexus.

Okay, here’s the thing. I’m not really familiar with R.L. Stine. I know he’s incredibly famous, hugely respected and has sold almost as many copies of his books as the big gun of Horror fiction, Stephen King.  It must be an age and generational thing (and by that I, of course, mean I’m old) as I’ve never read a Goose Bumps book or any of his other numerous titles.  That said though, his take on Man-Thing is an enjoyable, frantically paced read that while taking Ted in a vastly different direction, is hugely influenced by EC Comics and the Twilight Zone, which you know, for someone of my vintage is no bad thing. The dialogue is crisp, sharp and witty and shares a similar sense of humour to that bastion of comicdom, MAD Magazine, which again for my generation is a definite two thumbs up. Given all of that, Man-Thing feels like a loving ode to the comics of yore that’s been written by someone who adores the format, which brings an energy and enthusiasm to the story that’s sometimes lacking in modern horror comics. German Perlata and Rachelle Rosenberg ensure that Stine’s tale is dripping in gloriously gory and action packed detail, and add a touch of the pulps to proceedings which help to manifest and accentuate the authors influences. Topped off with a number of short, Al Feldstein style horror vignettes, Man-Thing is a strange, slightly weird and incredibly welcome foray into the world of monsters and things that go bump in the swamp. Horrifically good fun… Tim Cundle