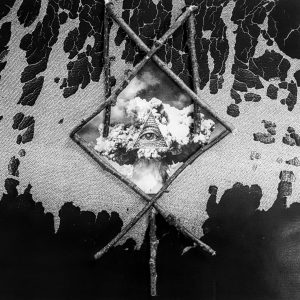 The much anticipated debut from South Wales based Made of Teeth is finally here and it is does indeed have teeth. Featuring past/present members of Lacertilia, Spider Kitten and Taint, you always had the feeling that this was going to be a bit special.

They set out their stall with the crushing Citrus, Fetus, Potus. A statement of intent if ever I heard one. A crushing Keelhaul style riff, with dual vocals going back and forth, akin to a ferocious disagreement at the edge of the apocalypse. Drunk on Bleach is up next, bringing a more straight up Karp meets Melvins vibe to the album. You can hear the hatred through the speakers, as things take a turn for the weird on third track Weeper. Spoken word verses spat over bass and drums, building to a bruising chorus. Beautifully done. We are lulled into a false sense that survived the brutality and we are about to emerge from the chaos, with Hook, Tooth and Claw. As it turns out the gentle sound of a wave lapping against the shore, followed by some sombre acoustic guitar, is just a ruse – a moment’s peace before for the impending blast of Black Flag style riffing to follow. Bleak Phlegm sees the band in noise rock territory like Today is The Day do so well. Harsh, heavy riffs that peak and trough, making you feel that you’ve been through some sort of violent ordeal. After a breather we get final track The Karman Line, a song which somehow manages to throw all previously mentioned influences into a glorious finale.

Six tracks of the most punishing songs you could ever wish to here. This is not easy listening and quite honestly I expected nothing less. But nevertheless this is a damn fine debut album and on top of everything else it’s free. With their first batch of live shows lined up, I for one can’t wait to have my brain melt out of my ears in a club somewhere.…Chris Andrews