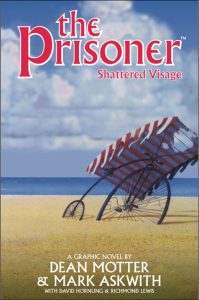 Cult classic THE PRISONER has been captivating audiences and firing imaginations since it first aired in the UK in 1967 and in the US the following year. Now fans can go even deeper into The Village with this official graphic novel sequel set twenty years after the events of the iconic TV series.

Originally published in 1988, SHATTERED VISAGE tells the story of former secret agent Alice Drake, whose round-the-world solo voyage is interrupted when she is accidentally shipwrecked and washes up on the shores of The Village. There she encounters Number Six, finds out what has become of Number Two, and discovers the true purpose of The Village.

Titan Comics, a licensee of ITV Studios Global Entertainment, are delighted to release this long out-of-print classic with new material, including character sketches and notes from writer/artist Dean Motter . Fans can finally get their hands on the unmissable next chapter in THE PRISONER saga for the first time in years.

“When I was approached to do a series based on The Prisoner, I leapt at the chance. It was one of my favourite TV shows when it first aired … My thinking turned to doing it as a post-modernist fable – one that took place in the current era, but that would re-open the questions from the original saga.

However, doing the research was going to take more resources than I had – so I drafted my friend and colleague Mark Askwith to help me with that aspect of the project. It became a collaboration almost instantly. I am honoured to see it re-presented as part of Titan’s ongoing celebration of The Prisoner‘s ongoing 50thanniversary.”

SHATTERED VISAGE joins Titan’s line of titles based on THE PRISONER, which includes the previously unavailable masterpiece THE PRISONER ART EDITION, showcasing never-before-seen artwork from graphic novel legends Jack Kirby and Gil Kane – as well as THE PRISONER: THE UNCERTAINTY MACHINE, a brand new mini-series by writer Peter Milligan and artist Colin Lorimer.

SHATTERED VISAGE will be available to order through the Diamond PREVIEWS catalogue later this year.