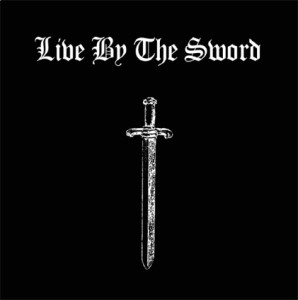 This is something of a special release. Live By The Sword is a project/ transatlantic supergroup of sorts (I bet they hate that label!), made up of ex members of bands such as Strongarm & The Bullies, Razorblade, Cornered and Justice, and this record commemorates the 150th release on Rebellion records, so congratulations on reaching that milestone fellas! L.B.T.S. find their inspiration in the brickwall streetpunk and oi! sounds from both sides of the Atlantic as they kick out these two bangers. Think bands such as The Bruisers and their tough oi! sound with some hardcore touches around the edges, but add to that musical reference to UK 77 (Slaughter & The Dogs) or UK82 (Blitz) and you can start to hear the cornerstones of the L.B.T.S. sound. Both songs are hard and catchy and I hope these guys find another reason to celebrate and write some more songs. Tom Chapman