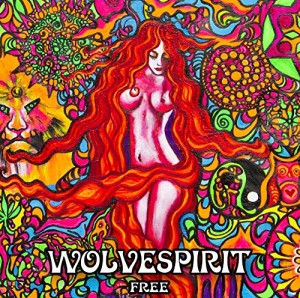 Initially released in June 2015, in their homeland of Germany, WolveSpirit’s third album “Free” finally gets a U.K release through Spirit Stone Records. Getting massive thumbs up from all the major music press in Germany, the album charted at number fifteen on the German independent rock charts and also charted through amazon.de.  Their brand of blues infused, psychedelic rock has clearly made the rock fans of Germany sit up and take notice.

Having toured with the likes of Kadavar, and Zodiac as well as the legendary Uriah Heap, Wolvespirit instantly bring to mind bands like Sweden’s Blues Pills and sixties Satanists Coven, while singer Debby Kraft’s raw energetic vocals reminds me of Stevie Nicks or Janis Joplin. Production of the album is handled by Michael Wagener, whose best known for his work in the 80’s with bands like Skid Row, Motley Crue and Metallica. I’m guessing that it’s his connection with that scene, that led Mark Slaughter (from Slaughter); to lend his distinctive raspy vocals to the tracks “Shining” and “This is love”. A strange choice, but ultimately one that works very well.

WolveSpirit have managed to capture that sixties psychedelic vibe, mix it with the heavier riffing that the 70’s threw up, all the while keeping it sounding modern and fresh. Rounding things of nicely is the artwork. A suitably colourful trip, that perfectly sums up what WolveSpirit are about. They are leaving the artists commune, that they call home and will be touring mainland Europe throughout 2016, including dates with the Spiritual Beggars. So do yourselves a favour, get this record and catch them on the road.  Chris Andrews