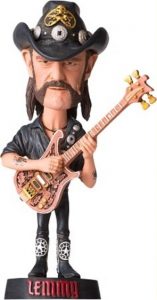 Lemmy is immortalized as a hand-numbered limited edition bobble-head, where he is captured striking the familiar pose which made him an icon for millions.

This intricately detailed bobblehead by Drastic Plastic has a limited edition run of just 2000 units.