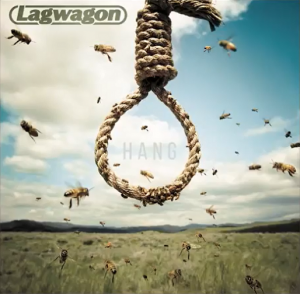 Lagwagon – Hang LP/ CD (Fat Wreck)
For me, Lagwagon have always been the definition of the Fat Wreck sound and style. Fast, melodic and anthemic, this has been the soundtrack for kids in skatepants and brightly coloured shirts for almost a quarter of a century which is pretty incredible. This album marks the return of Joey Cape and his crew after a relatively long absence, and whilst retaining all the hallmarks of the classic Lagwagon sound, it is also a mature record. Critics of the genre might suggest that bands like Lagwagon paved the way for the Blink 182s and Sum 41s of this world to “dilute” punk rock and bring it to the mainstream, but this record is a powerful statement that should be taken seriously. Of course it is very melodic, and features no end of singalongs, but given some of the tragic events that have accompanied the band, not least the recent passing away of Cape’s friend Tony Sly, the album is often melancholic and introspective. That does give the record a greater depth than you might expect. There are even big rock and metal moments to be heard, “The Cog In The Machine” lies somewhere between Foo Fighters and Avenged Sevenfold, but it is always stamped with the Lagwagon sound. This is not “just another comeback record”, but a powerful album that is well worth your time. Tom Chapman