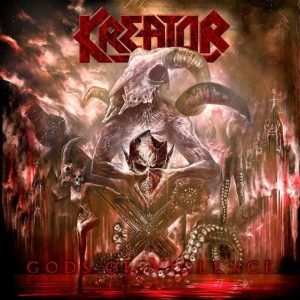 Thrashing back with their best album since ‘89s Extreme Aggression these purveyors of Teutonic Thrash have managed to recapture a raw and energised edge, fashioned with the desire of their old school sound and re-vamped with a huge millennium production. Gods Of Violence has it all – razor tight riffs, anthemic choruses, and the visceral roar of Mille Petrozza. It’s an album packed full of intensity. World War Now, Satan Is Real, Totalitarian Terror, and Hail to the Hordes lay waste to all they encounter, pummelling eardrums and wrecking necks. With all the quality thrash metal releases over the last two years Kreator have had some stiff competition, and without losing any of their original character and power the band have managed to create an incredible record. Okay, some of the subject matter is a little predictable, but so what? It’s done well. From the opening grandiose procession of Apocalypticon right through to the closing bars of the 7.20-minute epic Death Becomes My Light this is the album Kreator needed to deliver to ensure that they remained relevant while continuing to be a force to be reckoned with… Mark Freebase

I’m torn. Kreator are one of my favourite bands of the 80s, and after a bit of a dip in the 90s the band’s last three albums (Enemy Of God, Hordes of Chaos and Phantom Antichrist) were a complete return to form, and even more so. I personally think the much underrated guitar wizard Sami Yli-Sirniö, who I already loved for this work with Waltari, had a lot to do with this. After this overwhelming triology, Mille and the band took a different approach for Gods Of Violence. Not that the entire, modern, Kreator sound has been thrown overboard, but thrash gave way to a more power metal approach. You have to look past the intro and killer opening track World War Now which can easily hold its own against any of the anthemic tracks the band have written. It’s Satan Is Real which makes me question the bands new direction. More power, but less speed, the combination of which, for some reason, doesn’t allow the song to take off. The pace picks up again with songs, like Totalitation Terror and the title-track, but I can’t shake the feeling that it’s not entirely fresh. I understand the message of the record, which is cented around concern for the more polarized world we live in, but even with the speed and aggression it lacks that final, life-ending punch. The last five songs just don’t do it for me, although the German sung part in Fallen Brother really adds to the intense emotion of the song. Maybe this was all part of Petrozza’s master plan as his new album is about as polarized musically as several countries are politically. And now I’m also torn. Is this mission accomplished for Kreator? Martijn Welzen