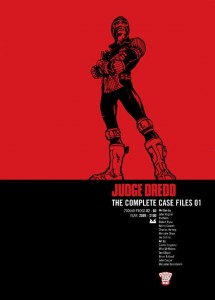 Judge Dredd: The Complete Case Files 01(10th Anniversary Edition) – John Wagner & Carlos Ezquerra (Rebellion / 2000AD)
Marking the 10th Anniversary of its original release Rebellion/2000AD have seen fit to celebrate the occasion with the re-release Judge Dredd: The Complete Case Files 01. Chronicling the Judge’s first ever outings in the pages of 2000AD, and showing us the origins of Mega-City One’s greatest lawman.
For the uninitiated, those of you that missed the movies, and those that didn’t buy any Anthrax records in the 80’s, Judge Dredd is the law – Judge, jury and executioner. It’s 2099 and Earth is nothing but wasteland due to several nuclear wars. The people of Earth have congregated en-masse in areas known as mega-cities. Dredd is a “street Judge” on a mission to protect Mega-City One from the bad guys. As with all good comic heroes we get the usual family issues and slightly annoying comic relief character-in this case Walter the Wobot, but 200AD balance this correctly with some truly ruthless criminals.
The classics stories such as “The Robot Wars”, and “The Return of Rico” are all here and serve to inform us that these stories and characters have families and backgrounds and do well in fleshing out Dredd’s world, but this being a full reproduction of the originals, we also have to go through some of the Judge’s more dubious outings, such as “The Comic Pusher”, a rare bad day for Mr. Wagner.
The layout looks great and the original colour pages and spreads have been lovingly re-produced by the same creative teams from those first issues of 2000 AD, Carlos Ezquerra, Mick McMahon, Brian Bolland, Pat Mills and John Wagner. At over 330 pages long the intensity of the action, make this an easy and engrossing read and leave you begging for more. A triumph for British comics… Chris Andrews