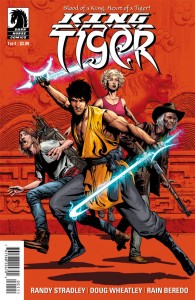 King Tiger #1 – Randy Stradley, Doug Wheatley, Rain Beredo (Dark Horse)
You’d be forgiven for thinking that this is Dark Horse jumping on the bandwagon by dipping into their back catalogue to try and find a new star. Well to be honest…they are-but it’s worked. They may have found a new star in King Tiger. Originally part of Dark Horse’s 90’s superhero universe-“Comic’s Greatest World”, King Tiger –aside from a few fleeting appearances in “Ghost” was a character that was never really developed. That’s now been suitably rectified and he finally gets his own book. And what a book it is.
Conceived by Dark Horse Founder and sometimes Star Wars writer Randy Stradley and drawn by Aliens v Predator and Star Wars artist Doug Wheatley King Tiger is a shining beacon in a hopeless, desperate world. Combining his Kung-Fu skills with ancient sorcery, King Tiger is something of a unique entity in the world of comics. Of course there’s an assistant and in this case we get Milo, a stoner type character ala Jay of Jay and Silent Bob fame, minus the profanity. This unlikely twosome are thrown together to fight an ancient evil from Tiger’s past. Their relationship brings to mind the calculated ruthlessness of Blade and the more headstrong approach of Abraham Whistler, albeit younger.
Stradley’s writing, once again pays terrific attention to detail as the story unfolds, something which he did so well in his Star Wars run, putting other writers to shame in the process. The art of Doug Wheatley is once again second to none and drags us helplessly into the action. I admit that I wasn’t initially sold on this comic when it landed in my inbox, but once you start, you get drawn into an intriguing story( the first act in a four part arc), which leaves you begging for more. Blood of King. Heart of a Tiger. Hell of a book… Chris Andrews