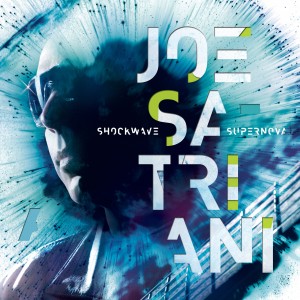 Joe Satriani – Shockwave Supernova CD (Sony Music/Legacy)
Metalheads and thrashers, right through to lovers of classic rock will all quite rightly know the name of this highly esteemed guitar virtuoso. Now with his fifteenth studio album about to explode in the current climate of guitar based music ‘Satch’ has managed to emerge like a quality vintage encompassing all of his wizardry and cutting a contemporary tone incorporating that well established sharp and slick fretwork. Does any other solo guitar performer sound this good, or even this prominent? The skill throughout the entirety of ‘Shockwave Supernova’ is the shear ambience masterfully controlled during the fifteen tracks, the technically precise finger work, and the moulding of the tunes themselves – the slick groove and feel they create. Opening title track ‘Shockwave Supernova’ perfectly sums up the transcending journey on which the listener is about to undertake during the ensuing 64.12 minutes. Carefully crafted licks building a strong base for the songs, not an over indulgent plethora of self-indulgence, this is where Joe Satriani has proved his outstanding musicianship. ‘On Peregrine Wings’ is a powerhouse of arena rock master-dom cutting through with a massive existence, whilst ‘Scarborough Stomp’ is one hell of a toe-tapping rocker. To say ‘Goodbye Supernova’ would sit comfortably on any Pink Floyd release is an understatement as its hugely seductive presence leaves you with many thoughts. A major aspect which should grab the attention of so many listeners is the fine-tuning of classic rock aura immersing itself within the album, there is a real feel of authenticity throughout the playing, a living breathing intensity. The great thing about this record is that the man himself does not outplay his welcome, but at the same time he certainly does not sell himself short. The mysterious opaque feel gloriously surpassed from the album cover fittingly portrays this true guitar great. Mark Freebase