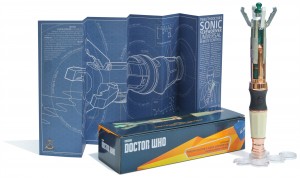 The Wand Company have revealed that a limited edition of their latest Sonic Screwdriver will be on sale exclusively on the BBC AMERICA Booth at this year’s San Diego Comic-Con, prior to general release.

The Twelfth Doctor’s Sonic Screwdriver Remote Control is finally here to give Doctor Who fans what they have been asking for: a brand new, hero prop replica which is a superb recreation of the Sonic Screwdriver used by Peter Capaldi in Series 8. A limited run of 168 laser-etched numbered Sonics will be available exclusively to purchase on the BBC AMERICA booth (#4129) for the first time at San Diego Comic-Con (8th-12th July 2015) prior to general sale from 7th September from www.BBCShop.com .

The new Twelfth Doctor’s Sonic Screwdriver is a fully functioning gesture-based universal remote control which can control your TV and other home entertainment equipment. Learning the gestures and programming the Sonic Screwdriver is easy, and the intuitive gestures allow the user to become the Doctor. Flick it open and the clasps extend with a satisfying clunk; press the grip mounted button for instant light and sound action or use the Any-TV-Off function just for fun!

The Twelfth Sonic has been made in direct response to the huge number of requests that The Wand Company received from fans all over the world asking for an extending version of their famous Eleventh Doctor’s Sonic Screwdriver.

“Since our Eleventh Doctor’s Sonic went on sale, we have had a constant stream of requests from fans of all ages asking us to make an extending version. It wasn’t easy to engineer a solidly reliable device that can withstand being repeatedly flicked to extend it, but we’ve been able to do it, and I’m certain that any fan of Doctor Who is going to love it,” said Chris Barnardo, co-founder of The Wand Company.

Jason Easy, Senior Licensing Manager at BBC Worldwide, said, “The Wand Company continually exceed expectations with their range of Sonic Screwdrivers, and the Twelfth Doctor’s Sonic is no exception. The Sonics are not just technologically sophisticated, but also beautifully made and have exciting features that delight fans.”