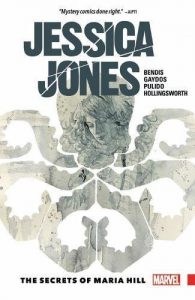 Oh what a tangled web she weaves as first she practices to deceive…  Deception, deceit, half-truths and secrecy are stock-in-trade for Maria Hill, former head of SHIELD, Nick Fury’s chosen successor and the master spy architect of more dubious, morally bereft operations and deniable missions than she could, or would, ever want to remember. The ex-spymaster is no slouch when it comes to looking after number one, so when she appears in Jessica Jones office asking for her help, whatever it is that brought her there has to be pretty darn serious, as the last time they had any interaction, Hill was responsible for trying to drag Jessica’s husband, Luke Cage, off to a prison fit for (super) heroes*. And Jessica Jones not only remembers when she’s been wronged, she’s also no slouch when it comes to holding a grudge.

Talking of her other half, in the wake of her undercover mission for Carol Danvers that forced her to alienate everyone she loved and sent her to Ryker’s, in The Secrets of Maria Hill, Jessica is busy trying to build, and rebuild, her bridges with her family and her personal life. With that in mind, the very last thing she needs is to find herself becoming mired in the ever deepening mud of Maria Hill’s deadly and dangerous world. But since when did Jessica Jones ever do anything that was good for her? With the money upfront and her family life dangling by a thread, Jessica takes the case and almost immediately wishes she hadn’t, as she’s wrenched out of her comfort zone and plunged into a maelstrom of treachery, double dealing, betrayal and clandestine mystery that’ll change both her, and her clients, lives forever.

That Brian Michael Bendis, he doesn’t half know how to tell a gripping tale. One full of didn’t see that coming moments and vivid realistic characters that intersperses fantastical daring do and intrigue with moments of intensely personal real life style drama that anyone and everyone can relate to. Then there’s the gritty, murky art of Michael Gaydos that adds a sense of place, time, authenticity and purpose to the story, art that’s so striking it actually makes you imagine that you can smell the hot asphalt, the over-boiled onions and hot dogs of street vendors and the spent exhaust fumes of yellow cabs and that you’re walking the streets and dives of New York City with Jessica. Together they’re responsible for creating something special and pushing The Secrets of Maria Hill forward in all manner of unexpected, and incredibly welcome, directions. They’re responsible for Jessica Jones. Gaia knows someone has to be as she could never be responsible for, or look after herself. And I suspect that if she weren’t a fictional entity, she’d be glad that Bendis and Gaydos were her guardians. I know I am…  Tim Cundle

*Back when, if memory serves me correctly, Tony Stark was running the show following the implementation of the superhero registration act and the first Civil War