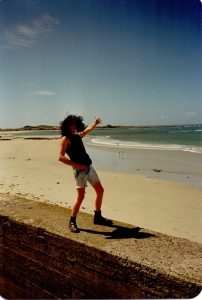 My parents had agreed to let me stay in the family home while they took my brother and sister on a package holiday. I was little over 16. My friend and I had earmarked this time for our first full-on magic mushroom trip!

We’d seen the older kids in the area scour the local park for the tiny fungi and been shown the basics of what not to pick. We’d also been told apocryphal tales of people ‘never coming back’ from taking too many and were warned about dosage.

Psilocybin is, basically speaking, an LSD-alike, although it feels way more organic and natural when you eat a bunch of mushrooms. Not that I knew that at the time.

We ate a handful each, had cheese on toast to curb the metallic taste and went out into the freshly aired autumnal evening. Before very long, it became clear that something was happening. It had dropped dark and the street lights had come on. One of the lights formed a giant ball of energy and shot a huge beam into my chest, it almost knocked me over. Then the road in front of us began bubbling like the molten surface of a volcano. We sat down and discussed these incredible events, struggling to work our jaws or make sentences. We must have looked like we were visiting another dimension.

After a couple of hours of laughing and incredulity we began to descend from the height of the trip and made our way back home. I impulsively went to make a sandwich but was stopped in my tracks by the beauty of bread and the enormity of it’s importance. After an hour worshipping bread I made for the toilet and glimpsed my blue/yellow face in the mirror – eyes bouncing off all over the shop.

I’m not advocating anyone do them, or LSD. You need to know about them beforehand. Taking unidentified fungi can be deadly. Doses need strict adherence. I must admit though, that I look back very fondly of what I learned during my ‘trips’. The earth is about a lot more than the one dimensional systems in place want us to think. Sometimes we need to step out of ourselves to see things more clearly. Sometimes we need to be stone cold sober.

Although it’s a long time since I felt confident to do them myself, I look back and know that these tiny things shaped me irrevocably. Hammy

Hammy created Peaceville Records in 1986 and ran it for over 20 years. It lives on today. He is currently promoting his label history & memoir Peaceville Life

Books, Features, Music
One comment to “It Ruined My Life… Hammy”