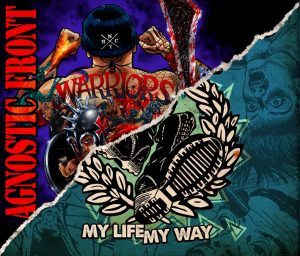 When I think about NYHC, five names immediately spring to mind. Sheer Terror, Cro-Mags, Youth of Today, Underdog and, the Godfathers of the scene, Agnostic Front.  The latter have become synonymous with New York Hardcore the world over, and have taken their no-nonsense, no quarter given and none expected, bullshit free, bruising brand of HC to just about every corner of the globe. While their sound has undergone a constant evolution since the release of the United Blood EP more than thirty years ago, both Warriors and My Life, My Way (reissued together) are closer in sound, tone and feel to the crossover mayhem that filled the grooves of Liberty… and One Voice, and later on in their career Another Voice, than anything else in the AF discography, and damn, they sound good. No, scratch that, they sound great. Huge riffs that circle and swoop around a slam heavy, mosh happy rhythm section that smacks you upside the head with a devastating right hook before Roger Miret steps up to the mark and knocks you square on your arse with his anger filled, visceral howl that serves as a rallying cry to the faithful everywhere.  You’ve probably heard countless people talk about a ton of endless waffle about Hardcore anthems, but trust me on this, if you really want a record that’s FULL to bursting with sing-a-long, passionate, energetic tunes that’ll make your spirit sing and your soul sour, then you need Warriors & My Life, My Way. There’s a multitude of reasons why Agnostic Front are known as the Godfathers of Hardcore. And Warriors and My Life, My Way are two of them… Tim Cundle

More reissues from the guys at Nuclear Blast, this time we’re treated to 2 albums from NYHC stalwarts Agnostic Front. First up is Warriors. Originally released in 2007 and produced by Roger’s younger brother Freddie Cricien of Madball Warriors heralded the debut of new drummer Pokey Mo of Leeway fame.  Carrying on with the “crossover” style they rediscovered on Another Voice Warriors while not a classic, it is an enjoyable slab of NYHC.  Roger barks and spits his way through track after track with the anger and enthusiasm of man half his age, while Stigma’s signature riffing and soloing prevail throughout. Fans of Hatebreed and the like will lap this up, I’m not sure about old school A.F fans though, but tracks like For My Family and We Want the Truth are mosh pit gold.

Following that came 2011’s My Life, My Way. Once again produced by Freddie Cricien, this album seems a bit laboured and unfocused.  A lot of throw away tracks, with what seems like lazy playing, from people who are capable of so much better.  Hardcore by numbers, if you will. That said Us Against the World is an enjoyable sing along, while That’s Life sounds like Victim in Pain era Agnostic Front. There is always something good to find on every A.F release, and with a near 40 year career behind them, we’ll allow them this blot on their near impeccable record. But the record card read – must try harder. Which they did on their next jaw dropping incendiary powerhouse of an album, The American Dream Died…..Chris Andrews