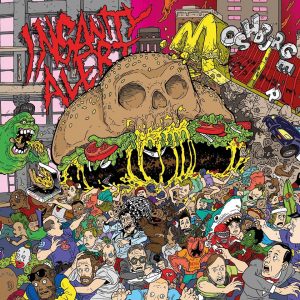 Crossover is alive and well in Austria. Maybe they needed a Dutchman to front them, to get their creative juices flowing but whatever it was they needed, they’ve found it and the almighty Alps are now crumbling thanks to so much thrashing power. As a whole Moshburger creates a nice link between the 80s and the current decade by bridging the gap between SOD, old Suicidal, DRI and Municipal Waste and Dr Living Dead. It’s the band’s second album, but the only difference in their sound and direction between this and their self-titled debut, is the tightness. Thrash, in my opinion has to be about control. The band is insane, and it feels like a bunch of certified lunatics, but they never let a song crash out of control. There’s speed, danger, reckless behaviour, beer, pot and an anti-David Guetta song, yet still they remain in control and relatively sane. Insanity is contagious, so sound the Alert and get ready to crossover and thrash out…  Martijn Welzen