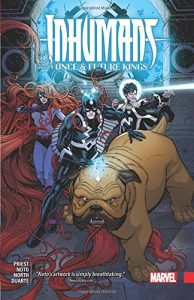 Every story starts somewhere and while nobody was ever born wearing a cape, some are born to rule. Black Bolt was always destined to be a king, Medusa to be a queen and Karnak and Gorgon to serve the throne of Attilan. But there was a time when Maximus wasn’t his brother’s arch enemy and didn’t seize every opportunity to thwart his siblings plans and Once & Future Kings is the tale of that time, of the period before duty to the people of their Kingdom took precedence over everything else and the now (in)famous inhuman Royal household were just teenagers trying to find their place in the world.

Life was never straight forward or easy for Black Bolt and his companions though, and in Christopher Priests tale of the ragged and winding path that destiny often follows, the fate of the Attilan itself was left hanging by a thread. Set in the aftermath of Maximus and Black Bolt’s parent’s deaths, before the latter ascended to his position as King, Once & Future Kings is a story of duplicity, treachery, betrayal, lost love, duty, misunderstanding and redemption that lays the foundation for , and explains, the animosity that drives the brothers apart. It’s a story of the changing of the guard, of the old order being replaced by the new and how the more an individual tries everything within his power to change things, the more they inevitably stay the same.

Unfolding in the finest tradition of Shakespearian tragedy, albeit a modern interpretation of one that doesn’t end in the same sort of misfortune as Will’s most famous works, Once & Future Kings mixes action with meticulously plotted and executed drama, deftly written dialogue and intricate characterisation that slots seamlessly into Inhuman mythology and cannon. Powerful, imaginative and focussed, and thanks to Phil Noto’s sumptuous art as beautiful to behold as it is to read, Once & Future Kings is proof positive that sometimes the past is a treasure trove of magnificent stories just waiting to be told. And if, as I am, you’re more than a little fond of Lockjaw, then you’ll be even more inclined to lose yourself in the pages of Priest and Noto’s epic, as it also includes some of the finest moments from Ryan North and Gustavo Duarte’s laugh out loud funny Canine Master of Time and Space. Inhumanity at its finest… Tim Cundle