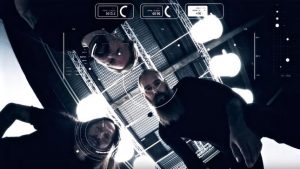 Swedish metal visionaries IN FLAMES premiere the music video for their first single ‘The End’. Directed byPatric Ullaeus, the video is infused with pure adrenaline, stepping inside a first-person shooter game and bringing the viewer front and centre of exhilarating action and suspense

Premiering last month via Decibel Magazine, ‘The End‘ is the first offering from IN FLAMES’ 12th studio album,Battles, out November 11th via Nuclear Blast.

The band will embark on a UK-wide tour with AVENGED SEVENFOLD and DISTURBED in January: