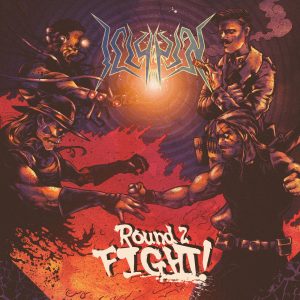 As unbelievable as it may seem now, there was a time when being a thrash maniac meant that you had to subsist entirely on a diet rooted in the past. Even three of the big four turned their backs on the scene in which they has made their names in order to pursue different musical avenues, leaving Slayer as the sole member of the quartet to fly the thrash flag high. The nineties were an incredibly bleak period, and it was only after we entered a new millennium that thrash once again started to gain momentum, as a legion of new bands discovered the power of chugging guitars, insane double kick rhythms and the reckless, wild abandon of lightning quick music that dwelt somewhere between traditional metal and it’s swivel eyed, unmediated cousin, death metal. Having been raised on the early days of the thrash scene, it made my heart swell with pride to discover these new bands, and even now when I stumble across an act as drenched in metal thrashing madness as Illyrian, my blackened excuse for a soul allows me to feel pure unadulterated joy for as long as the riffs flow. And on Round 2, flow they do, stopping and starting on a pinhead, in this raging, beautifully technical monster of a record that fuses Catharsis, Nuclear Assault, Possessed and Vio-Lence with progenitors of the original Morrisound “movement” like Obituary. It’s brutal, changes gears effortlessly and combines power and precision in a furious miasma in order to forge a symphony of metallic grandeur, one that even the most jaded and cynical of old thrashers can lose themselves in. To hell with work and to hell with everything else, let’s thrash…  Tim Cundle