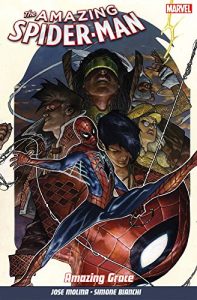 There are few heroes in the Marvel pantheon who strike the same sort of chord, or have the same sort of relationship with their readership and fan base as Spidey.  His nervous jocularity and the way he utilises humour as a defence mechanism; his inability to form meaningful relationships; the way he’s driven by personal loss, his desire to protect everyone around him and his constant struggle to always do the right thing in the face of often seemingly insurmountable odds lend him an incredibly, human quality that most of us can, on at least some level, immediately identify with.  He is, for all intents and purposes, the super-powered everyman. Or at least he was until he became the CEO of a major, multi-national corporation.  But even then, when lady luck finally shined down on him, nothing much (apart from now being filthy rich) changed for him. Pete was, and still is, Pete and Spidey is still Spidey. So, when he becomes involved in an incredibly personal and involving story like Amazing Grace, it feels far more inclusive than if another hero had been the central character because of the bond that exists between him and his audience and, well, because he’s Pete and because he’s Spidey.

Ostensibly, Amazing Grace is a mystery involving a family man who does the impossible and rises from the grave, returning to his old life with a new sense of purpose and faith. Spidey being Spidey, and having seen more than his fair share of the inconceivable, unimaginable and even the absurd, sets out to prove that the ‘Miracle Man’ of Harlem isn’t wat he seems to be. His dogged pursuit of the truth leads to him teaming up with a new gang of “magic” based heroes (the Santerians), taking counsel from a most trusted and unexpected source, sees him swinging into action in Cuba as he becomes inveigled in the darker aspects of faith, religion and belief and battles to uncover the truth and save his new friends and New York from falling under the thrall of the man who came back from the dead. While the story itself is full of all of the usual wall crawling adventure, fully rounded characterisation and perceptive and incisive dialogue and thanks to Bianchi and Broccardo, looks just as incredible as it’s plot is, it’s also a much deeper examination of the, often opposing, roles that science and faith play in everyday life and attempts to reconcile the idea of existence after death with the reality of living in an increasingly rational world.  At times, the touching and endearing story feels like a vessel for writer Jose Molina to express his doubts and questions about faith, loss and what comes next, which lends it a sense of intimacy, as there isn’t a single person out there who hasn’t spent a considerable, and probably unhealthy, amount of time thinking about, and dwelling on, exactly the same things. And using Pete and the Santerians as the embodiments of science and religion and rationality and impossibility to help convey, come to terms with and try to understand the complexities of life and the human condition, is a stroke of genius and just one of the many reasons why Jose Molina’s complex and creative fable is so enjoyable. Fantastic… Tim Cundle